This post is in response to the 10gen MongoDB Schema Design Contest. It was also extracted from talks that I’ve given on the subject.

UPDATE: MongoDB awarded this entry the grand prize in the design contest.

We attend conferences, and as attendees, the schedule at the conference is often lacking. It’s poorly organized, lacks information, and requires Internet access. This makes it hard as an attendee to choose the talks that you want to go to. BusyConf is an attempt to solve that problem while also making it easier for conference organizers to run a conference. We handle the calls for proposal, we allow organizers to rate proposals, we give them an interface to turn activities into a schedule, and we publish that schedule in many formats. We also handle ticket registration and credit card payments.

MongoDB was a huge win for us while designing our application. The goal of this post is to explain why we chose MongoDB, how we use it at BusyConf, what design decisions we considered, and what the alternatives might have been.

Here’s a common myth that I’ve heard before: “MongoDB design is easy because its schema-less.” I disagree with this. It’s true that a thoughtful design will yield a longer term gain in easier development, but it can be tricky to conjure up with such a design. I find it much easier to get a relational design right the first time, but the costs of maintaining a relational design can sometimes be higher.

“You could use a relational database for that! Why use a document store?”

MongoDB’s speed and scalability are wins, but for us, it’s not as important as the win we get from rapid development. Rapid development comes from the ability to represent richer data models that more closely match the business problems and the patterns of access.

Many people say things like: “You could use a relational database for that! Why use a document store?” MongoDB has become our default database for greenfield development. We now make ourselves justify the use of relational. Instead of, “Why MongoDB?” we ask, “Why NOT MongoDB?” 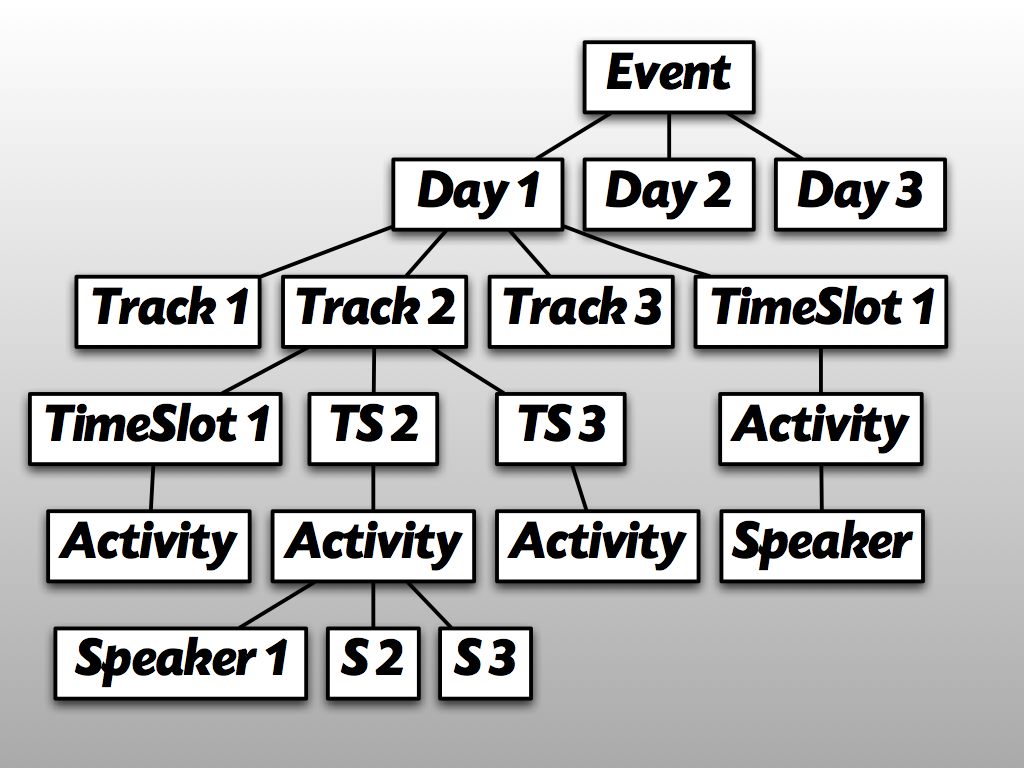 When we access our data for rendering a schedule, we need to pull all of this at once, because we want a seamless, cached experience for the conference attendee. 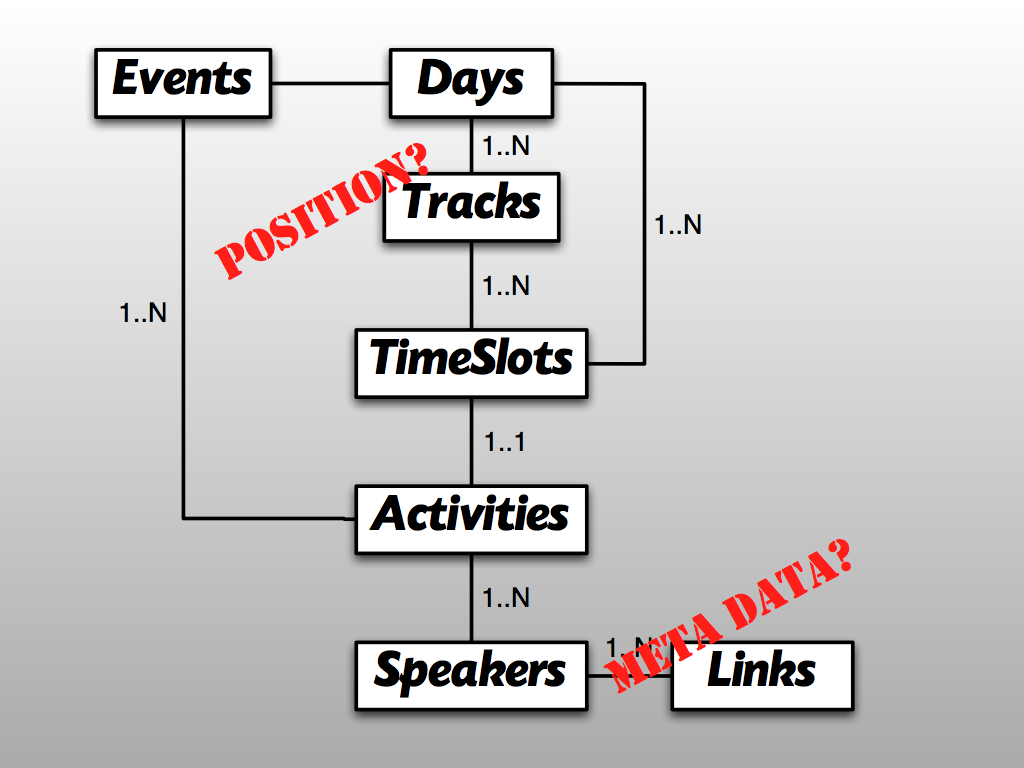 What kind of queries would be required to pull all the data from this design?

It looks pretty straight forward until you imagine having to pull all this data at once to render a full schedule. What kind of query or queries would be required from a relational database? Would you use one big nasty join, or lots of individual queries? Neither seem like a great option.

To add to the problem, little things like the position of tracks are not easily represented. Neither is the potential explosion of meta data that could come from each object.

Representing our logical model directly within MongoDB was our first instinct, BUT putting this into practice actually led us down a road of unnecessary complexities: 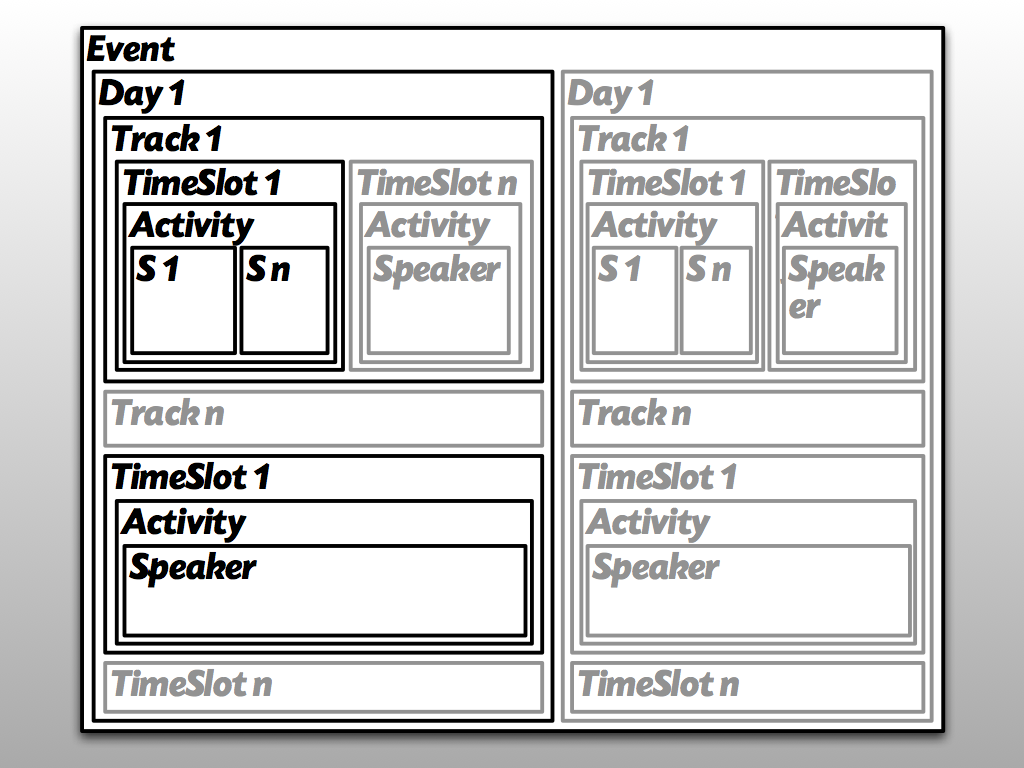 This first attempt was a mistake.

While we solved the problem of quickly accessing the entire event, we no longer have an easy way of accessing an individual activity or speaker. We can quickly see the complexities in the drawing above.

We iterated on the design many times, but in the end, we took a fairly unique approach. 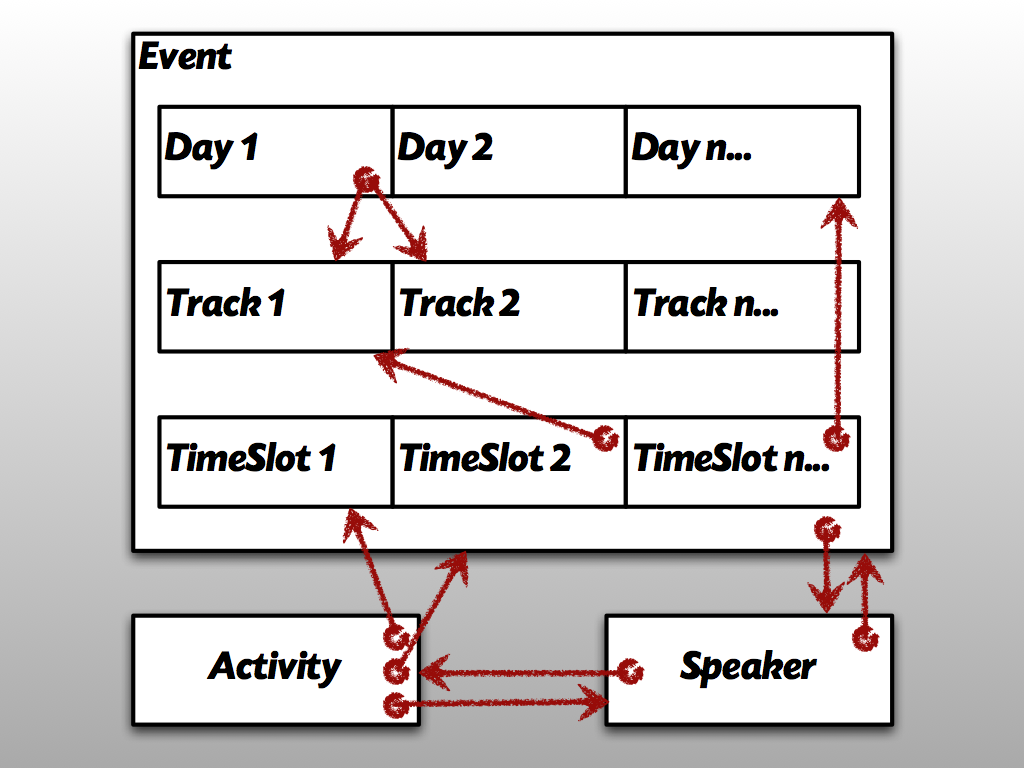 Instead of one collection, we broke out Activities and Speakers.1 This matched our patterns of access much better. Instead of deeply nesting every object, we chose to embed arrays of days, tracks, and time slots immediately under the event document.

MongoDB can be somewhat tricky when it comes to the up front design, but if done right, it has some great benefits both in defining and matching your unique access patterns along with fairly decent long-term maintenance benefits.